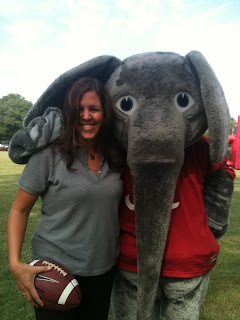 Last week, I made my unspectacular debut on a regional TV show called "Tide and Tigers Today". It's an hour long show that airs on Saturday mornings from either Auburn or Tuscaloosa to cover the Auburn Tigers or the University of Alabama Crimson Tide home football games, and to talk about college football, in general. My official title is "Tailgate Reporter", which means I am not the girl interviewing the coach on the sidelines, or the person throwing down statistics, facts and figures. My entire job is to report on the other stuff - the fun, human interest type of stories.

After missing opening weekend of college football (because we were on our honeymoon!), I wanted to get down to Auburn and ROCK my first TV show. As it turns out, I should have done a lot more in the way of preparing. I kind of figured I would be able to "wing it" - after being in radio for 17 years, I am accustomed to thinking on my feet and interviewing people. I would drive down on the morning of the game, and chit chat with some folks about their tailgating experience that day. I had also arranged for a friend to bring her son to be on camera for him to talk about how excited he was to be at his first game. I was supposed to verbally spar with the guys back in the studio, and ask them "tough questions" they weren't prepared to answer to see if I cuold stump them. Should be easy enough, right?

Wrong. Due to technical issue, I couldn't hear the hosts back in the studio and couldn't answer the questions they were asking me. Due to a schedule shuffle, my friend's son couldn't come. Due to having no backup plan for if my star interviewee couldn't come, I randomly grabbed a very shy child and ambushed him to being on camera - which turned out just about how you can imagine. Due to being late, I had parked very far away, and had to literally run the mile and a half to the stadium, which left me sweaty and unable to have to time to find other people to put on camera. Due to being late, I didn't have the time I planned to do the research for questions I was going to ask the hosts back in the studio.

Super. Awesome. Fabulous. I failed BIG time...and in front of a lot of people. I hate being bad at something...h-a-t-e it! I especially hate it when it's completely preventable. I considered writing an email to the producers to apologize and quit (or at least, offer to, if they wanted me to!). My husband talked me out of that, and suggested I wait until a few days had passed before talking to anyone about it and to see what they thought of how I did.

It turns out that they weren't thrilled with my efforts - but not as disappointed as I was in myself. They had LOTS of helpful suggestions for how to do better next time, and had even set up a fun interview for me to do while I did the next week's show with the mascot of the school's team. Wait...what? Next time? You mean, you are not firing me?? You mean, I get a second chance? Seriously?

Of course, I was psyched to have a second chance - but also, pretty scared, as well. What happens if I flopped again, even with all of their help?

This morning, I tried to remain in gratitude for my second chance - and it changed everything. I decided that I was going to be grateful for the whole day, and purposefully, thank God for the whole experience, even if I failed again. I even remembered to hit my knees and say a little prayer before I headed out for the day.

Instead of being AWFUL, here's how it went down: My darling husband took me out to breakfast first, and even walked me to the broadcast site, holding my hand the whole time. As we drove down, I wrote out all of my questions in big writing on a clipboard, so that if I froze up, I'd have a little cheat sheet. My interview arrived early, and I got the chance to do some preparation with him beforehand, and clear up some of the questions that could have been tricky during the live shot. The other reporter saw how much fun we were having with the interview, so he made a fun suggestion for how we could do the final segment - and it was a huge hit! The equipment worked, and I could hear the questions they were asking me from the studio.

Can I get a "Woo hoo!!!"? What a difference a grateful attitude can make!

Today, I feel gratitude for:
- Second chances
- A yummy breakfast at Waysider in Tuscaloosa with S - and getting to hear about the tradition
- Getting guidance and help from my coworkers
- Feedback that will help me get even better next week
- Love and support from my husband, family and friends

Thanks, Dude. You are awesome. Thanks for the second chance, and for not letting me blow it. Thanks for the whole day. Seriously, God. I really appreciate it. Now that I can relax for a few hours and reflect, I am also brazen enough to ask protection, guidance, and comfort for my loved ones - specifically, D, C, D & RJ, L, C, and anyone else that is suffering without speaking up. Amen.
Posted by Jeannine Jersey Bailey at 2:34 PM

What is this blog all about?

This is a (mostly) daily blog, where I pause to take stock of how good life is, if I am paying attention. A friend introduced me to this practice a few years ago with these guidelines: list 5 things I’m feeling gratitude for today, leave names out - initials only, and conclude with a prayer for the day.

Some very awesome stuff has started to happen now that I am looking at the world with grateful eyes. One side effect of these gratitude lists is that I find myself going through the day, trying to find things that I feel gratitude for.

Prayer had always been tricky for me. I like doing it, but I never felt like I could be "me". I know a little different these days. The God that I know is just happy that I'm praying - He doesn't care what language I use. It's not uncommon for to address Him as "Dude". These lists allowed me to find a new prayer voice.

I’m under no delusions of grandeur - I am not a gratitude guru or a spiritual giant. I’m a very flawed human being, and these lists are my attempt to stay aware of and grateful for the things God grants me, in spite of my flaws. God is working in my life all the time, and when I pay attention, I can see the Big Guy's work everywhere. I hope, by sharing this with you, that you can too!